Posted on 4 years ago 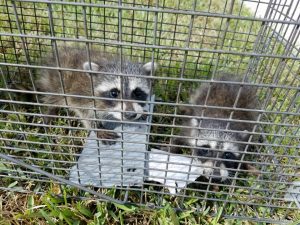 Sightings of raccoons in residential areas across Florida are very common. Because they’re far from rare, many property owners don’t mind having them around. There are also others who fear them because they know for a fact that raccoons are wild animals and not meant to be around humans. The important question right now is this — are raccoons dangerous? Should you get rid of them or just let them be?

Raccoons are nocturnal creatures. One wouldn’t usually see them roaming around during the day. They’d probably be resting in abandoned buildings, sheds, and cars. Some say that raccoons that show up in daylight are rabid and extremely dangerous. This is true to some extent but not necessarily. However, you should never put your guard down. It is better safe than sorry.

If you could, read up on raccoon facts so you can learn more about them. It’s not even unusual for one to hear about raccoons attacking humans or pets. They get aggressive as a form of self-defense. As much as possible, stay away from them and don’t attempt to touch, pet or capture them on your own. While your intentions may be good, these raccoons, once again, are wild animals. They don’t really know that you’re just trying to be nice.

Some raccoons carry rabies. As you may already know by now, when you get bitten by a rabid animal, you have to seek medical attention right away. Shots will be administered to you immediately. Do not take this for granted and never delay treatment. Rabies can kill humans.

There are plenty of other diseases raccoons may carry including Leptospirosis, another deadly infection. So if you’re still asking, are raccoons dangerous, the answer is a resounding yes. To keep them out, clean your surroundings, never feed them, and have them removed the moment you see one lurking around your property.

For raccoon removal assistance, Animal Wildlife Trappers is ready to help. Our services are available in Orlando, Maitland, Longwood, Winter Park, Deltona, Sanford, and nearby communities. Call 352-267-0546 for a free estimate.